To Speak or Not to Speak, That Was the Question

Last week I attended CodeGarden (CG16), the annual Umbraco conference in Denmark. This was my fifth year and hand on my geek heart it is always one of the highlights of my year.

As CG16 drew nearer my usual excitement was being drowned out by nervous anxiety: this year my name was on the speakers list. We all understand imposter syndrome, and most of us suffer from it. Of course there were going to be people in the room who knew this stuff and oh so much more. I was talking about Nested Content (a list property editor) and the two people who literally wrote the thing were likely to be in the audience! 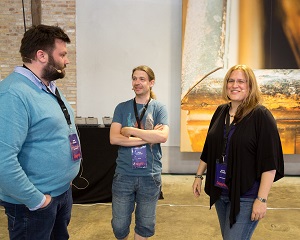 Mic'ed up and waiting to gophoto by Doug Robar

There were three reasons why I felt I didn’t really have the right to feel nervous:

But even considering the above I was still damn nervous. Something noticed by the ever delightful Doug Robar by virtue of me “being quiet for the first time”!

Well yes, I believe it was. I got up on stage and 720 seconds later I returned to my seat. Of course I was nervous on those first slides but apparently I relaxed into it after a minute or two (or three according to one guy!).

After we had done our individual presentations the three of us were back on stage for 15 minutes of Q and A. This being CodeGarden we had an attentive audience with some great questions. I wasn’t afraid to admit that I didn’t know a particular answer. I was lucky, the creators of the software were actually in the room so I was able to divert to them (it’s not what but who you know, after all!) 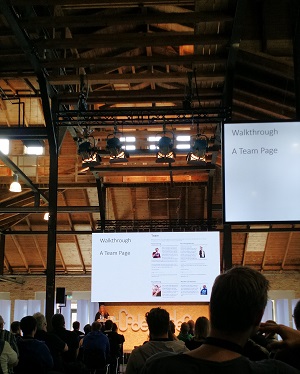 View from the backphoto by Jack Stunell

Well I learned a lot before, during and after my talk. So if one person reads this and it helps them start preparation just a couple of days earlier, then job done and that’s why. And even if that doesn’t happen then forgive me but once in a while I enjoy writing whole sentences and not just lines of code.

So those lessons learned…

We’re a small business and I know we should discuss code and coding practises more. I think about it/them almost all day but I’m not sure how long I actually spend elucidating. Your nearest Umbraco meetup is a great place to get practicing on that too.

Unless this is your day job, the more you prepare and practice, the more relaxed you will be. This is not rocket science but I still want to say it as I left it a bit late (like most things I hear my mother saying!).

Before I started working on my slides I lost an entire weekend to: 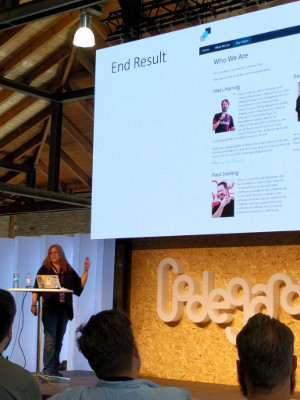 View from the frontphoto by Sebastiaan Janssen

Practise the others a lot too, of course, but especially those first ones. I was presenting in a big room, with the largest monitors that I have ever seen my words projected upon. I was surprised at how, during those first couple of slides, my brain went into overdrive as I looked out over a sea of people (ok, a very small sea).

If you don’t need to live code then quite simply, don’t. It took me hours to prepare screenshots of code samples and back-office configurations. But my was I glad that all I had to do was click a clicker as I progressed through the slides, not alt tab into Visual Studio and deal with whatever mood it would be in when I got there!

Lesson 5 - During the presentation itself, communicate

Breathe, smile, breathe… For each slide think about what you want to say, look up, step out from behind the podium (I know I completely forgot about that one!) and really try and communicate it to the people in the room.

I’m grateful that I was given the stage for those 720 seconds. Overall I think I enjoyed it, although currently undecided as to whether I will watch the video when it’s available!

Thank you to Umbraco HQ for letting me get up there, to Marc Stöcker and Kenn Jacobsen for being such great joint-speakers, to those of you who came to the talk, and especially those who gave me feedback afterwards.

And my next objective? To do another talk somewhere, but without having to have a cheeky beer beforehand, maybe ;-)

Since posting this article I have been recommended a couple of really useful resources: